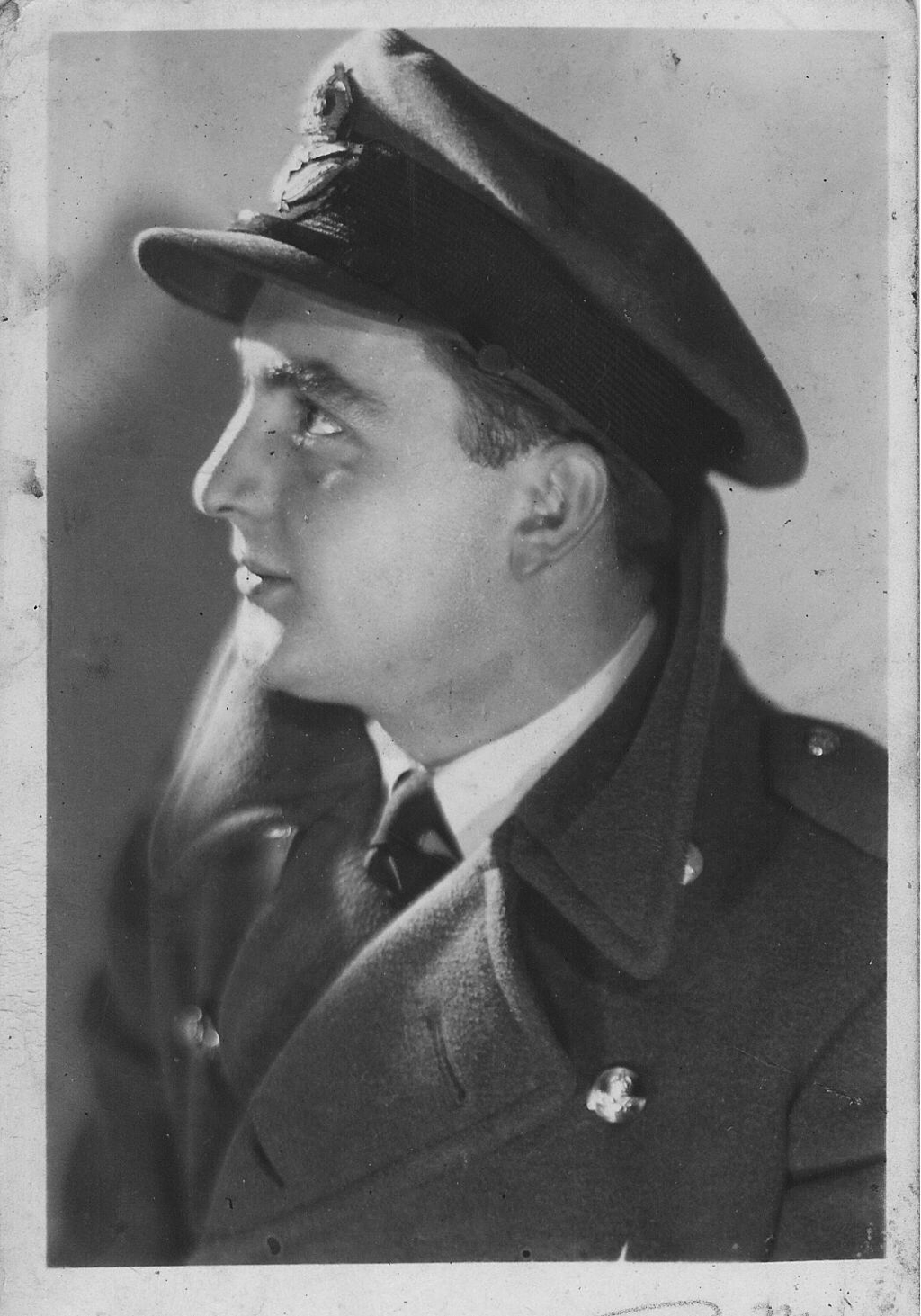 THIS IS THE TRUE STORY OF A YOUNG RAF OFFICER, A MEMBER OF THE CREW IN A LANCASTER BOMBER SHOT DOWN IN FLAMES OVER GERMAN OCCUPIED FRANCE IN WORLD WAR II.
My grandmother Gertrude Trott sat up in bed just after 2:00 am on the 20th June 1943 . She woke her husband and said, “ Ted, Ted, something has happened to Frank ! “ He replied, “Don’t worry love, get some more sleep, he’s not due to be flying tonight .”

What neither of them knew was, that night, their son Frank had volunteered to be one of the crew of a Lancaster Bomber on a mission to drop landmines over La Rochelle, Charente-Maritime, France.

The Germans had established a submarine naval base at La Pallice - the main port of La Rochelle.
( A German stronghold, La Rochelle was the last French City to be liberated at the end of the war. )
This is Frank Trott’s personal account, shared with family and friends, of his escape through German Occupied France with the help and bravery of the incredible people in the French Resistance.

During their homebound trip in clear moonlight they were attacked by Oblt. Erich Gollasch (3) of II/.NJG5 for an amazing 14 minutes before he managed to bring the Lancaster Bomber crashing down in the Loire Valley 02:01 hrs.
All the crew managed to bale out safely, but tragically the pilot, F/O. Derek Brown landed in the Loire river and was reported as drowned. 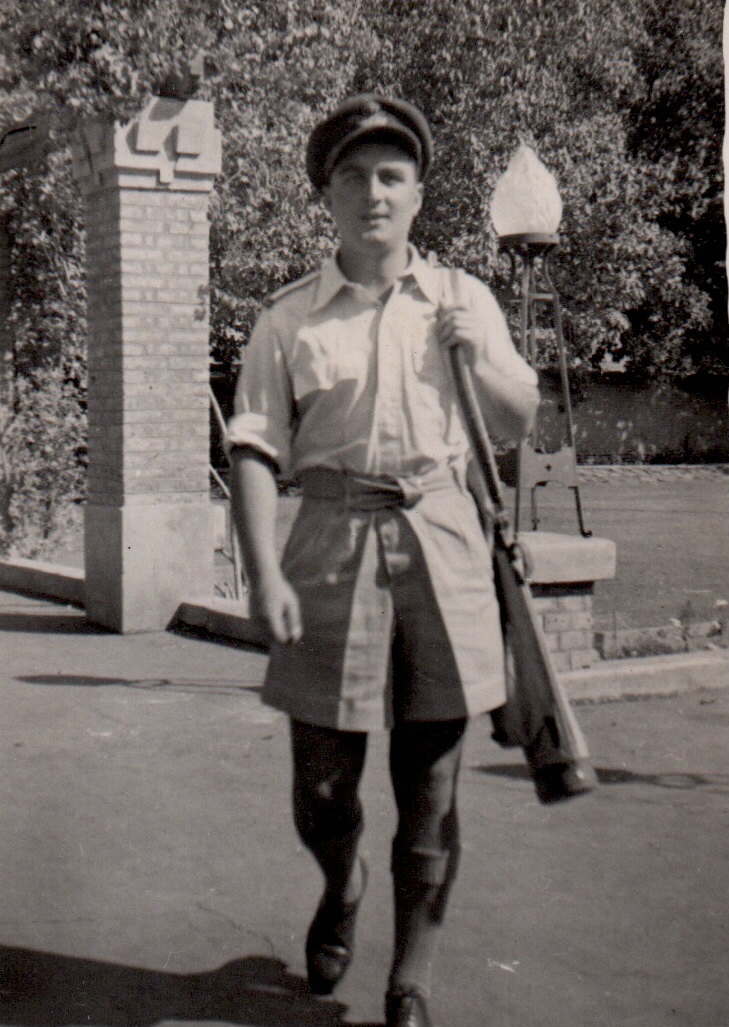 Photograph of Sgt. Alan Sheppard supplied by his daughter - Valerie Sheppard.
Farmers, Doctors, Teachers, Priests, Nuns, housewives and school children helped my father. He slept in homes, lofts, cellars, barns and sheds. In Nantes the two airmen were separated and guided individually through France into The Pyraneans, through Andora and into Spain. 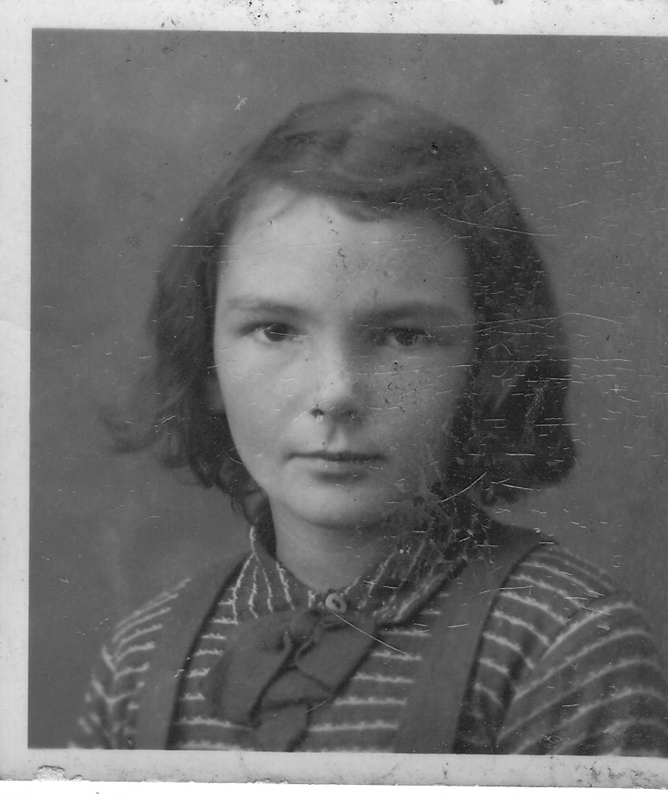 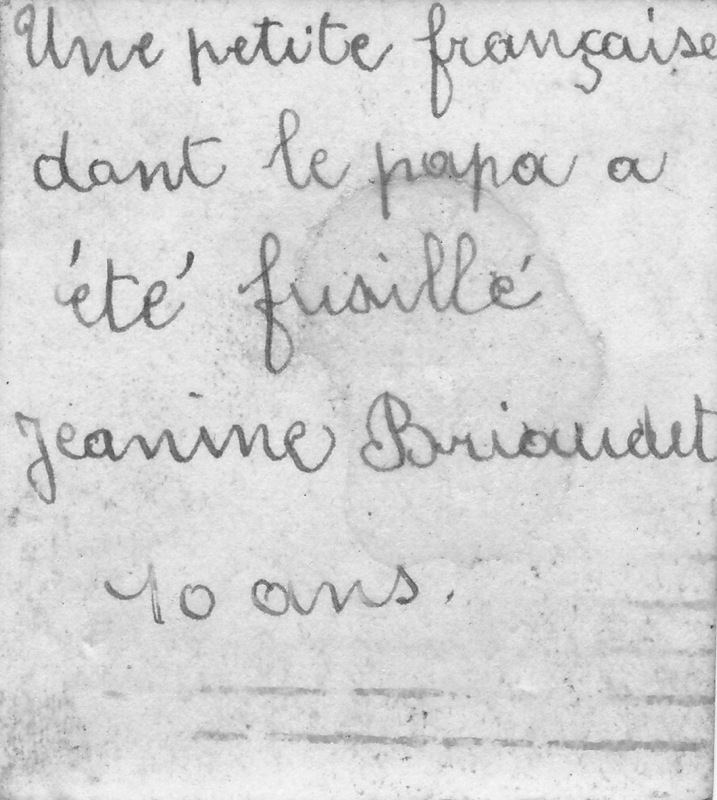 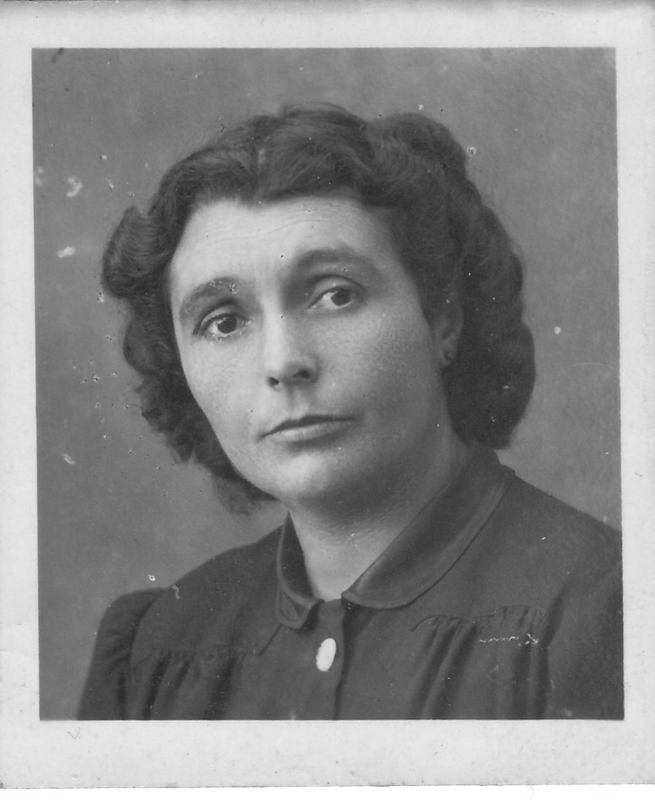 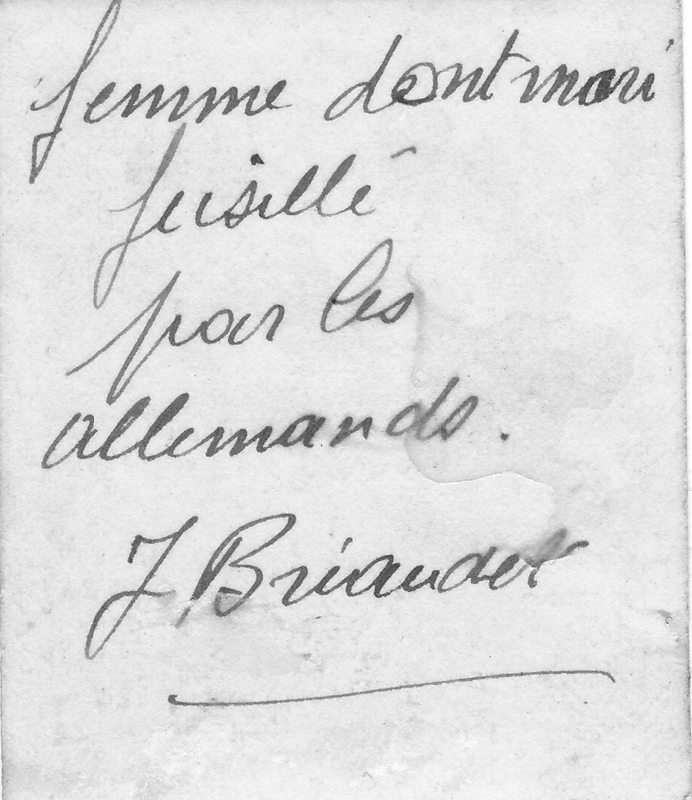 Ten year old daughter and her Mother, the wife of Charles Briaudet.
Charles Pierre Briaudet born on 31st May 1911 in Nantes, was shot by the Germans on 11th of May 1944 in Angers. 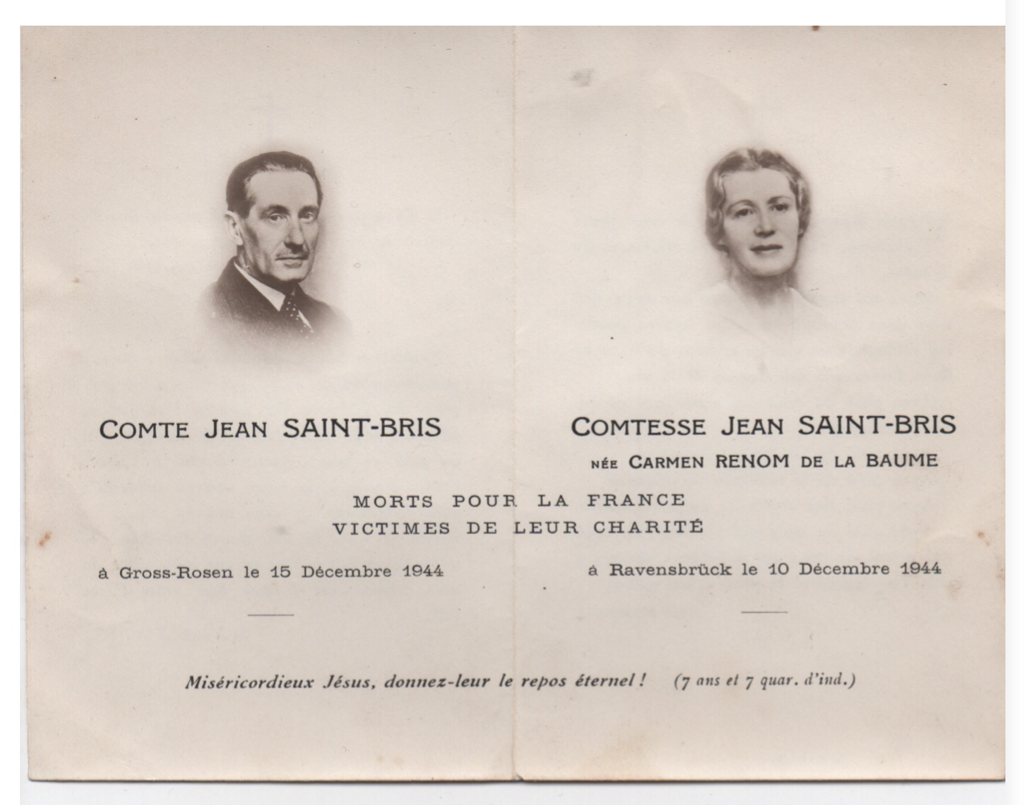 Memorial card for The Comte and Comtesse Jean Saint-Bris who sheltered Frank and gave him civilian clothes. They were later betrayed by their gardener and taken prisoner by The Gestapo. 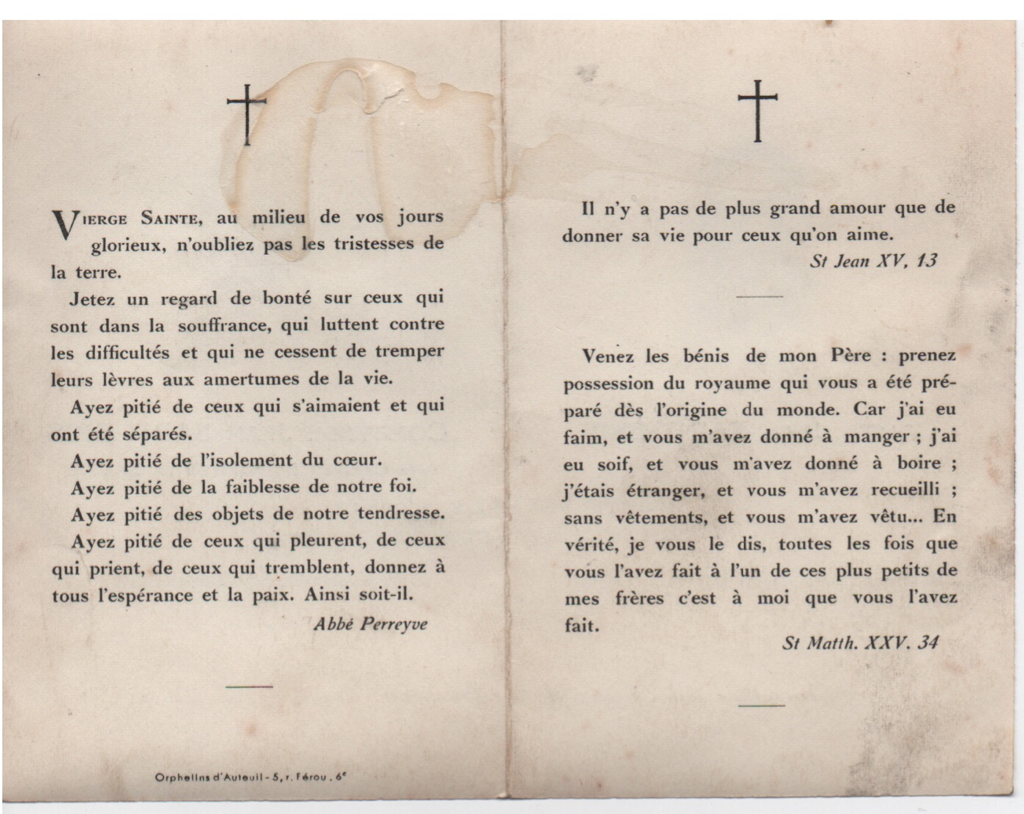 In 1940 the BBC opened it’s studio to the first members of the resistance who fled France’s occupation by Germany. By means of broadcasts from Britain the French Résistance found a voice that could be heard on the Continent serving to counter the Nazi propaganda broadcasts from Radio Paris and Radio Vichy.
Broadcasts would begin....”Ici Londres - Les Français parlent aux Français ” !
The Germans promptly prohibited anyone listening to Radio Londres.
BBC messages for the French Résistance were in code. Broadcasts would begin” Before we begin, please listen to some personal messages.” It was clear to nearly everyone that they were coded messages, often amusing and completely without context. Representative messages such as “ There is a fire at the insurance agency ” had a meaning to a certain resistance group. They were used primarily to provide messages to the resistance but also to thank their agents or simply to give the enemy the impression that something was being prepared. Because these messages were in code not cipher the occupiers could not understand them, so they had to focus their efforts on jamming the messages instead. 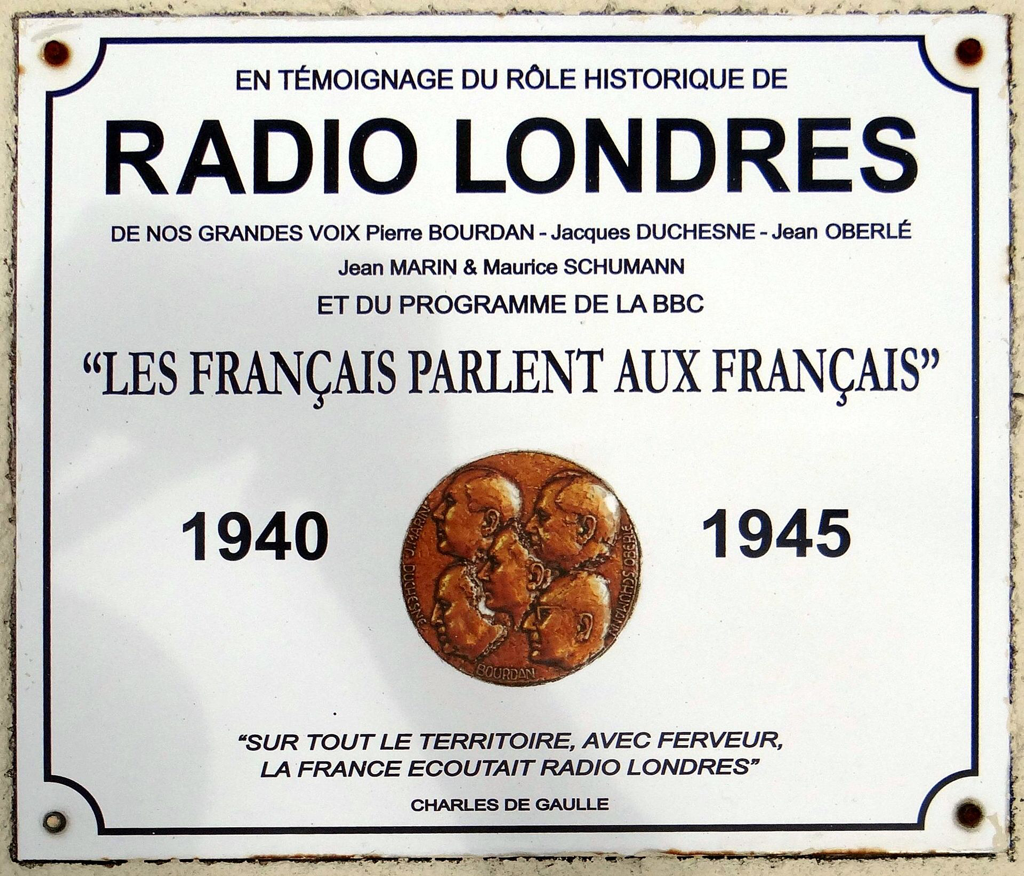 Commemorative plaque of Radio Londres in the cemetery of Asnelles, Calvados.
Behind the broadcasts the background noise of Beethoven’s 5th Symphony.....the first four notes of which correspond to the dot-dot-dot-dash of the Morse code letter V for Victory.
AFTER MY FATHER’S DEBRIEFING IN ENGLAND, RADIO LONDRES BROADCAST THE MESSAGE......
“J’AIME BEAUCOUP LE ROSÉ D’ANJOU”
A HUGE CHEER ECHOED AROUND THE LOIRE VALLEY.........
ONE MORE BRITISH AIRMAN HAD MADE IT HOME SAFELY. 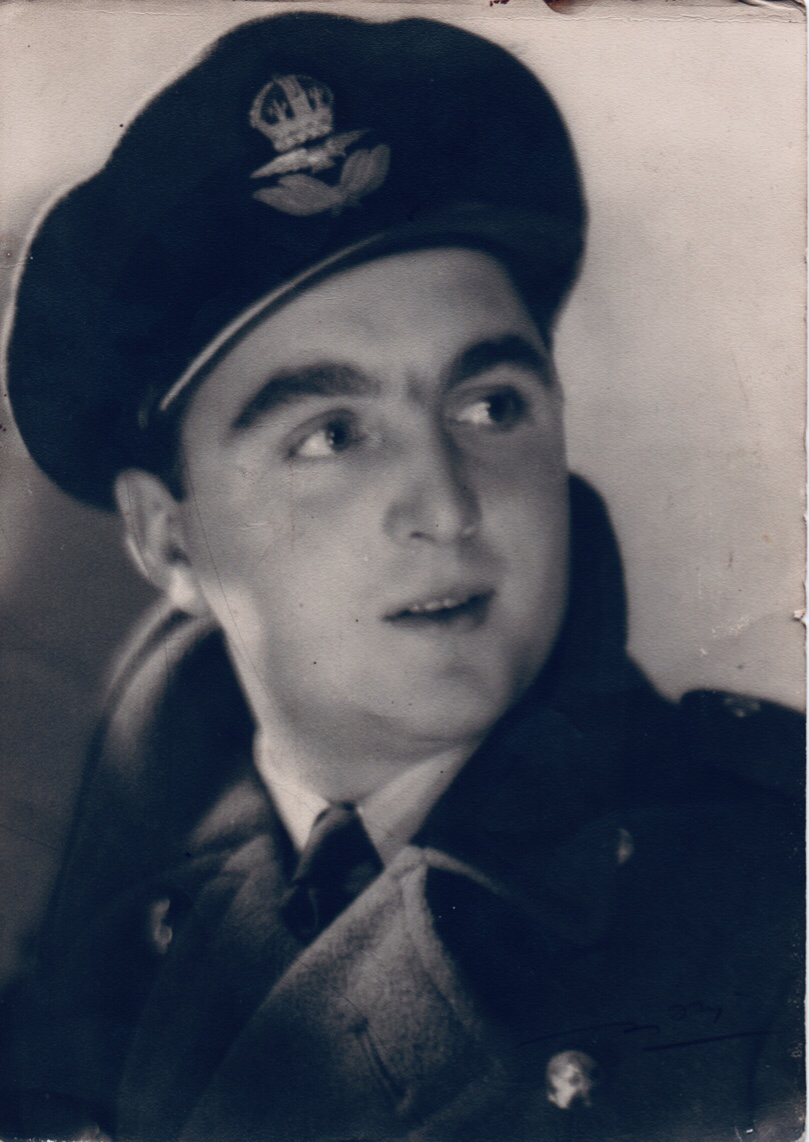